Here’s a few photos of the ’19 of the Best’ mural in the East Stand north stairwell of the Elland Road stadium.  It was a lot of hard but really gratifying work, a real team effort by myself, Paul Kent and Johnny.  I had very little to do with the badges or Wilko or The Don but love them nonetheless!  That’s me in the second photo – before anyone gets ‘sizeist’ about me please note that I am wearing SIX layers as the area was rather arctic at times.  Well, virtually ALL the time.

I originally painted an 18 player mural in the year 2000.  Overall it was frankly pretty poor but I had much less time to do it and didn’t really know what I was doing!  As well as the much more-limited time, there were much inferior reference images, techniques and materials at my disposal then.  More importantly, I was short on confidence in my abilities and myself in those days and went through a number of ‘self-crises’ too.  Working completely alone can’t have helped much either!  Thankfully, and with massive credit to Johnny & Paul, I think we’ve improved it no end, I hope you agree. 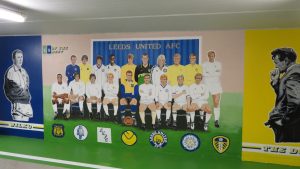 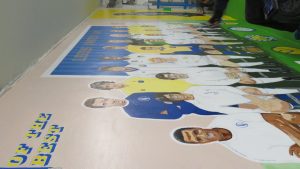 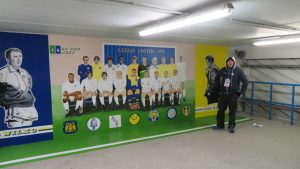