I’m very proud to welcome the prolific and quite brilliant writer CHRIS NICKSON as the latest interviewee for this website.  I was lucky enough to work with Chris recently, where he chaired a kind of Music Writing Forum with me and Peter Mills answering questions on our Stranglers and Van Morrison books respectively… that was the first time we’d met, despite Chris having almost a library bookcase of great tomes to his name.  And a very varied writing career too.  Anyway, I won’t bang on about how much inspiration and encouragement Chris provides, probably without even knowing it, see for yourself in the interview, another exclusive for www.endeacott.com.  Chris has his own site too: www.chrisnickson.co.uk

Chris, a summary of your writing career so far, please. 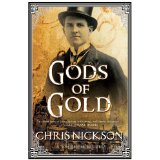 It’s been sort of an odd road for me.  My first published pieces were album reviews, back in the 1970s, just after I’d moved to America.  The first Kate Bush disc, and the reissue of a couple of Roy Harper LPs.  That was in a local music paper in Cincinnati.  I did a few more things for them, and published a couple of short stories in a tiny local magazine whose name escapes me now. I moved to Seattle in ’86, had a couple of one-act plays staged (never be writer and director; that’s a lesson I learned quickly), a couple more short stories.  In ’93 I had my first music reviews published in The Rocket, also local, but very influential and filled with excellent writing.  I went on to do more and more for them until they folded in 2000, by which time I was a senior writer on their masthead – I’m still very proud of that.  From ’94 I did a lot of quickie unauthorised biographies. A friend got me started. I combined that with music journalism as I wrote for more and more people.  It meant I could quit my job and write full-time, a big step as my son was born in ’95.  I moved back to the UK in 2005, still doing plenty of music journalism, but also writing more fiction again (in the intervening years I’d amassed 7 unpublished novels, the first from when I was 20.  I’m glad they never saw the light of day).  Finally The Broken Token came out in 2009 and now my focus is much more on fiction.  But I still keep my hand in with music and actually also write a number of press releases for artists (yes, I’m available, folks).

Books you’re most proud of? 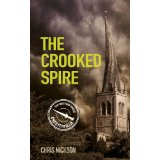 That’s almost impossible to answer, but if pinned to the ground and forced, I’d say At the Dying of the Year, the fifth in my Richard Nottingham series.  One reviewer said I write ‘the fiction of loss,’ a phrase that struck me, and it’s very apt in that book.  Emotionally, it drained me completely, I was a wreck when it was done.  But I think that depth comes out on the page. It took me to a very dark place inside myself and I needed time to recover from it.  It’s about love and loss, even though it’s a crime novel, although crime novels should always be about more than simply finding the bad guy.

That said, each of my novels has something to make me proud, I feel. Gods of Gold, which came out earlier this year, features a woman, Annabelle, who first appeared in a short story, then wouldn’t leave me alone.  When I decided to set a novel against the backdrop of the 1890 Leeds Gas Strike, she was the one who said ‘I lived through that.  Let me tell you about it.’  She’s very much the linchpin and emotional heart of this new series.  My two books set in Seattle take some of my own experiences as a music journalist there. I loved the place, I lived there for 20 years, and I wanted to take people there.  The Crooked Spire came to me in ten seconds, driving through Chesterfield (I’d lived very close to there for four years and knew the town well).  That one was a gift. So each book has something special for me.

Life balance – how do you manage it?

I write.  It’s what I do, it’s my living.  Between fiction and my paid work (press releases, music journalism) I spend most of my day writing.  But I do get away from the living room table, where I write.  Walk, go for a coffee, things like that.  One day a week we get out somewhere if possible.  Of course, you never escape being a writer. Even when you’re not typing, you’re thinking, even if everything is just on the back burner.  The subconscious is still ticking over.  And I do write fiction every single day of the year.  I’d feel lost if I took a few days off, to be honest.

I like this question, I’ve asked it before, likening writers to actors: do you try to get ‘in character’ when writing about or ‘as’ different people?

I don’t really do anything to get in character.  These people come to me (don’t ask where they’re from.  It’s the ether, and beyond that I don’t really want to know as it might break the magic).  All I’m doing is writing down the movie playing in my head.

With a series, the characters become family.  When I write a new book in a series I’m just seeing what’s been going on in their lives.  To me, they’re very real people.  Their relationships alter, they grow older and change, the people they love change, too.  To make them static would be the unreal part.  These folk are very much flesh and blood, even the minor characters.  They have to be.  If they’re not real to me, how can they be to someone reading the book?

Sometimes they’ll surprise me by doing something I didn’t expect.  But I love that.  When they get up and walk around and show their free will, it’s great.

How did you get started in writing?

My father was a musician when he was young, and a writer.  He had a couple of plays on TV in the late ‘60s.  So both those strands were there already.  I first fell in love with writing when I was 11 and had an assignment to write a story in three paragraphs.  I did, and something clicked into place.  I realised I loved this, creating something.  But then at 13, music took over. I bought a bass guitar and spent too many years hoping to be a rock’n’roll star.  I also wrote poetry, and once I set that to music, I saw myself as the next Leonard Cohen.  The only thing missing was talent.

So when I began writing about music I was putting my two loves together.  But fiction had been there, on a low level, for many years, a constant, a perpetual love.  I need to serve my apprenticeship first, to learn the craft of writing.  Journalism and those quickie bios were great for that.  You don’t have the luxury of time and endless revisions.  You learn to get it down right the first (or second) time.  Bang and it’s gone.

I take more time now, but that training has stood me in good stead.  When you have deadlines you have to meet them, so you work and develop self-discipline.  If nothing else, I hope I’ve acquired that.

How well does it pay?

It’s a living.  There have been times it’s been a very good living, but they’re the best part of 20 years in the past.  Between one thing and another, I get by.  Let’s leave it at that…

So many.  I return on a regular basis to the novels of Joanne Harris and John Lawton, for different reasons.  Joanne’s books have that sprinkling of magic that make me wonder if she’s really an earthling. John’s books, especially the Inspector Troy series, are a wonderful dissection of places and times.  They’re immersive. Candace Robb’s Owen Archer books were a huge influence.  She included her main character’s family, and the ways they changed and grew.  For beauty of prose, I go to Michael Ondaatje quite often.  For something as smooth as cream, Elmore Leonard.  For otherness it’s Peter Høeg.

Thelonious Monk, the jazz pianist.  He was unique, and there’s never been anyone who’s managed to do what he did.  No matter how often I listen to his work, it always surprises me and catches me off guard with its twists and turns.  I love piano, and Bill Evans is wonderful, but it’s Monk who catches that sweet spot.  There’s a whole history of black music in his fingers, but the way he brought it out was completely his.

John Martyn.  His ‘70s album were a fabulous run of remarkable music, remarkable playing and songwriting.  It just got me.  I remember just after I was 18 and a girlfriend played me ‘Bless The Weather’. We were at her parents’ house, in the first music room I’d ever experienced – big grand piano, cases full of sheet music, amazing stereo system – and she put on the album.  It was like someone had flicked a switch.  I was a fan from that point.  Still am – I even wrote a biography of him.

Even though I lived in Seattle a long time and saw most of the big bands before they filled stadiums, my tastes there are out on the fringes.  People like the Walkabouts, Gary Heffern, Michael Shuler; the ones who were not so much in the spotlight but who made more interesting, enduring music.  These days, for a long time, really, I’ve covered world music, and most of my listening now is in that area. I feel very far removed from mainstream music, and I don’t miss it at all.

A sense of place is very important in my work.  I want readers to feel they’ve been to that time and place.  Most of my books are set in Leeds.  It’s where I was born and raised, where I’ve come back to live, and I’m glad I have.

I know Leeds in a way I’ll never know anywhere else, and that’s deep in my bones.  I understand it.  And for quite a few years now I’ve been a student of Leeds history. I love it, love the discoveries and connections between past and present.  Where Trinity stands now, for instance, was the home of the Grand Pygmalion, Leeds’ first department store, well over 100 years ago – and then there was C&A.  So that spot has such a retail history.

Sadly, Leeds hasn’t been kind to its past.  We have some great Victorian buildings, but try to go back further, and you quickly hit some dead ends.  We have more older pubs than anything else, which might be a comment on Leodensians. 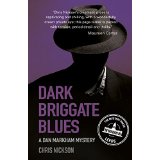 In January there Dark Briggate Blues, which is set in Leeds in the 1950s.  English provincial noir featuring an enquiry agent – the term we used from private detective in those days – called Dan Markham.  He’s young, loves jazz, and Leeds actually had a jazz club in those days called Studio 20, on New Briggate, where Sela Bar is today.  So music is a vital part of that.

Then, in April, the sequel to Gods Of Gold, called Two Bronze Pennies.  Much of it takes place in the Leylands, just north of the city centre, where many Jewish immigrants settled.  It’s about prejudice, what we’d call race hatred now, the fear of immigrants, which is still resonating loudly.

Then, in June, a small local press, Armley Press, is publishing my collected Leeds short stories called, imaginatively, The Leeds Stories.  The heart of it is a history of Leeds from 363 AD – 1963 told in short stories.