Thanks Nick for the interview for endeacott.com.  To start with, tell us about your writing career so far.

Aside from a batch of short stories which have appeared in a variety of publications, including The Mammoth Book Of Best British Crime, and a novella BANG BANG YOU 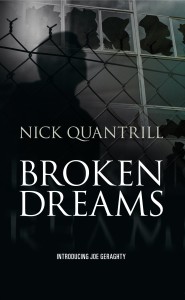 ’RE DEAD, my work follows the character Joe Geraghty, a small-time Private Investigator.  Geraghty works from an office in the Old Town of Hull and over the course of three novels he’s been a device or tool for me to explore my home city.   BROKEN DREAMS sees Geraghty looking for a missing person but it’s really a novel about the demise of Hull’s fishing industry and the effect of that in the present day.  THE LATE GREATS sees Geraghty babysitting a reformed band, but it’s also about the nature of Hull as a city and aspects that make it unique.  THE CROOKED BEAT sees Geraghty involved with a missing consignment of smuggled cigarettes, so it deals with the city’s recent regeneration as well as its courting of green technology.  Together I think of them forming an overview of recent change in the city.  The pleasing thing for me is that each book pushes me forward a little more and gets my writing noticed more.  I’m doing more and more events (writing and author events) and have recently appeared at Crimefest, one of the UK’s major crime festivals, and Iceland Noir, my first foreign trip to talk about my work.  The books have also attracted some national reviews, so fingers crossed things are heading in the right direction…

This is my ‘Sophie’s Choice’ sort of question, Nick: which of your books are you most proud of?

I think it’s always the latest one, so I’ll say The Crooked Beat but in truth it’s probably the one I have in my head ready to write next.  When stories are only in your head, they feel perfect.

As a writer as well as a family man, how do you manage, do you have a regimented routine for writing and then try to focus on your ‘domestic’ duties?

I try to make the best of what time I have available.  I have a couple of days set aside for writing, as well as the usual weekends and evenings.  Deadlines are a mixture of the two but on the whole I’m disciplined about writing.  Of course, other things sometimes have to take priority, but equally you have to make sacrifices, mainly in terms of a social life and television etc.

Do you ever ‘get in character’ to create believable protagonists, such as your Joe Geraghty or other protagonists?

No, I don’t feel the need to ‘get in character’ as such.  I spend some time thinking what kind of person a character is and what their motivation is.  From there, I try to pick them apart by approaching them from different angles.  People aren’t all bad or all good so I try and reflect that.

You’re a football fan (Hull City for anyone who didn’t know or guess!) so why did you make your protagonist, Joe Geraghty, an ex-rugby league player?

That’s true. I’m a long-term season ticket holder at HullCity but I’m also a sports fan who greatly enjoys rugby league.  I made the decision to give Geraghty a rugby background to serve the stories better.  I want the Geraghty novels to explain the city of Hull and rugby gives me an extra tool to do that.  As well as adding local colour based around the rivalry between the city’s two clubs, it also explains social change.  When the city had a fishing industry, generally speaking the east/west split meant fisherman and Hull FC fans on one side of the city, dockers and Hull Kingston Rovers fans on the other.  When the industry collapsed, the slum housing was demolished and people moved to outlying estates, diluting traditional lines in the city.  I find it fascinating. 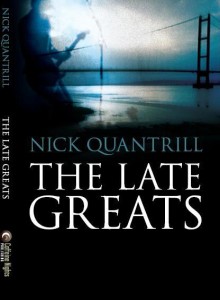 How did you commence your writing career, and are there any moments on this journey which you regard as a real Turning Point?

For me, it was more a gradual build-up.  I have no background in the arts.  I’ve always been a big reader though, and studying Social Policy with the Open University brought things together for me.  I started to see the topics I was studying appear in the page-turning novels of Ian Rankin.  It made total sense to me, so after finishing my studies and reading a really bad crime novel, I thought I’d give it a go.  How hard could it be?  Turns out it’s harder than I thought!

Books and music are constants in my life and there really are too many to mention.  Television and films have largely been sacrificed to free up time for writing but I’m not too fussed about that if I’m being honest.  Outside of writing and family life, I go to the football.  I don’t think I’m a hobby kind of person.

What are your short and long-term hopes for Hull City FC?  Are there any teams you do detest?  Any individuals in the sport today who you would gladly never see again?

There’s a question… our owner is trying to force a rebrand of the club from Hull City to Hull Tigers in an attempt to generate extra revenue in Asia.  To me, that sound like absolute nonsense.  Our history isn’t heavy with silverware but it’s our story and we should be proud of where we came from and who we are.  In the short-term, I’d like the idea to be consigned to the bin where it belongs.  In the long-term, it’d be great to see the club establish itself in the Premier League but I’m not star-struck by that level of football.  I don’t detest (too much) other clubs, but I have a list as long as my arm when it comes to players!

Do you think you can ever walk away from your club, never to support them again?

Given the above, it’s something I’ve been thinking about a lot recently.  As you Robert demonstrate in Scandal FC through Jimmy’s eyes, as you get older your priorities change, and although defeat still hurts, it’s not as consuming as it once was.  I don’t think you can entirely walk away but if my club changes its name and with it the people it represents, I’ll be thinking long and hard about whether I want to continue going to the matches.  In some ways it’ll still be the club I first watched as a nine year old but equally I’ll be disgusted with it.  I’m all for ambition but I don’t believe it has to be at the expense of tradition and history.

Back to writing fiction: are you ‘self-taught’ or did you study some form of creative writing lessons and the like?   Do you have an ideas ‘process’?

I’m self-taught, though I would say the countless books I read before deciding to write were my apprenticeship, even if I didn’t realise it at the time.  Once I’m half-way through a novel and can sniff the ending, I can start to think about the next one.  I keep a lot of newspaper clippings so often an idea starts to emerge from the pile.  It’s usually nothing more than a character or basic idea but from there it slowly grows in the back of my mind.  Sometimes the ideas are more fully formed.  All three Geraghty novels came from very specific issues I wanted to explore.

What do you find as most enjoyable about the whole writing process?  Are your books paying you well?

Having written is the best thing for me.  I like having something on the page to work with and improve.  Sometimes the act of writing is great, sometimes it’s like pulling teeth.  Like most writers, books don’t sustain me in a financial sense, though I’m luckier than most.  I combine writing with looking after my daughter.  She’s two, so it’s hard work at times (all the time!) but it could be far worse.

Do you think you’ll ever write about somewhere else other than Hull?

It’s something I think about a lot.  The Geraghty novels were always designed to be Hull-set novels, simply because it’s the city I know best.  I haven’t lived anywhere else.  Now, I’m not so sure.  The next novel, which is slowly forming in my head, will probably use some other locations, though its heart will be in Hull.

Do you see the title of City of Culture 2017 making a difference to Hull’s future?

Massively, I think.  I hope it’ll be good for the artists working in the city, as we’ve already shown we can put on great events that people want to attend and enjoy.  It’ll be great to build on that but I’m also a resident and a parent.  It can’t be denied that Hull has suffered from a negative image in the past so this is a real chance to change that, both to visitors and for my daughter to realise that her own city is full of fantastic things to experience and explore.  I have no doubt 2017 is going to be a great year.

Do you see yourself writing outside of the crime genre at some point in the future?

Not in the foreseeable future, but maybe one day.  It still feels like I’ve got a lot to do in the crime genre.  It’s what I love to read and write.  I do have other ideas, though.  I love what you and David Peace do with the mix of football and fiction. I can see the potential of a few Hull City-related projects.  I’m not sure how much I want to write non-fiction but I have a few ideas in that direction, too.  I really like Roddy Doyle’s earthy and gritty tales and have the vague notion that a story telling the life-story of Hull over the last hundred years through the eyes of a handful of families might be a good idea.  Think Downtown Abbey with added fish and violence, maybe!

Who do you admire outside of the crime genre, both as a writer and a reader?

I see reading as being entertainment so I like writers who are accessible yet interesting.  I love Roddy Doyle, Nick Hornby and going further back, John Steinbeck.  They all write with a big heart, which is something all writers can take and use.  I’ve recently read Mark Lewishon’s masterful All Tune In, a look at the early years of The Beatles.  It’s heavily researched but the book wears it lightly.  It’s a highly readable and insightful look into a story we all think we now.

Finally… do you think you will ever retire?

I’m like you. Why would you want to stop writing?  It’s the most fun you can have without leaving your seat!  I don’t foresee a time I won’t be writing.